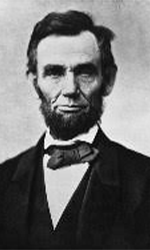 When Abraham Lincoln laughed at something during the Civil War, he is rumored to have been criticized for it, and in response he said, “If I didn’t laugh, I would surely cry.” Those of you who are caregivers, either professionally or for a loved one, know that can be true of us, too. If we only see the serious side of things, what is happening can sometimes seem unbearable.

My father spent the last two of his 97 years in assisted living, but as his oldest child and daughter, I was still responsible for much of his care. I had a sister-in-law who made regular trips to Costco for supplies, and two of Dad’s sons and his third wife visited at least once a week. But it was up to me to adjust his care plans with the staff and the home care agency that came in daily, take him to any off-site doctor visits and join him for three or four meals a week, among other things. 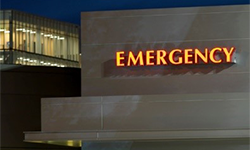 During those two years, Dad’s short-term memory and his ability to care for himself grew progressively worse. He was only safe when holding on to a walker, and he didn’t always remember to use it. He was supposed to ring for an aide to help him use the bathroom, but especially at night, when they were slower coming, he was sure he wouldn’t make it unless he got up on his own.

You can probably guess what happened. Right! He often fell, and although he never broke anything, if he hit his head, a house rule made it mandatory for him to go to the ER to be checked out. An ambulance was called, as was I, because Dad wouldn’t be able to give the ER doctors his medical history or say why he had fallen. I had to meet him in the ER, usually about 1:00 a.m., with his Medicare and insurance cards and a list of his meds.

This happened enough nights (4-5) that I developed a routine. Besides throwing on my clothes and grabbing his documents, I poured a Diet Coke with ice and lime into my Bubba thermos, put some Ritz Bits with peanut butter in a Ziploc bag, took deep breaths and headed out into the night, determined to remain calm and positive for all concerned. I also learned to ask for a warm blanket to wrap myself in, as together Dad and I waited three or four hours for the results of the tests. He dozed and I read, wrote texts or played games on my phone. Then I drove him back to the care center where I reported the always positive—thank goodness--results. Sometimes bandages or stitches were required but never a stay. If I didn’t laugh….

Dad did something elsethat could only be laughed at by me and other adults. (Younger grandchildren had to bekept outside his room until “the coast was clear.”)He’d forget to or couldn’t put his incontinence briefs and pants on after using the toilet. Especially when he’d had an accident, everything came off. Many times, he could be found sitting in his favorite chair naked from the waist down, or even walking down the hall, presumably looking for help to get dressed.What others thought about his state never seemed to worry him. Childlike, he was comfortable without clothes on and could see nothing wrong with it. I’ve learned that this behavior is quite common in elderly people with dementia.

After meals when I was with him, I tried to help Dad brush his teeth with little success. I also had “help brush his teeth” added to his care plan. I could only laugh when he said that, at 97, he shouldn’t have to brush his teeth anymore. I know he resisted help from aides, too. Of course, his dentist didn’t agree, but he was very kind to him and did his best to clean his teeth and file down the ones that were breaking off. 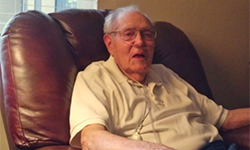 Before he passed, Dad had aspirational pneumonia seven times. Like all other parts of him, themuscles and valves in his throat were wearing out. A swallowing test showed water going down his trachea, but even with thickened liquids, food cut into small pieces, and eating nothing that easily turned to crumbs, he often choked violently during meals. His doctor knew it was only a matter of time before pneumonia struck again. He, Dad and I signed a POLST Agreement that specified no more hospitalizations or antibiotics when that time came.

Aspirational Pneumonia #8 came just a month later. Hospice was called, and Dad was only given comfort care. It took less than three days for him to die peacefully in his room. When we knew the end was near, those nearby came to visit. Though he wasn’t talking, we called his children who couldn’t come and put the phone to his ear, knowing that hearing often functions even in a semi-comatose state.

When the last child had said goodbye, I leaned close to Dad’s ear and said something like, “You can go now. You can stop fighting. This time you’re not going to get better.” Then, for the first time in 24 hours, he spoke, and in a strong voice said his last words to me, “So, you made that decision for me?” I guess I could have felt hurt, but I just laughed. Dad got the last laugh, too.

Marti Lythgoe is a freelance writer who for nine years has researched and written a monthly blog for a home healthcare agency. She loves to help others and herself by sharing what she has learned.