Still Competing After All These Years 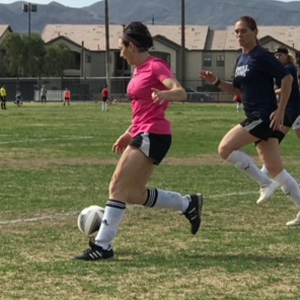 I played soccer for the first time during third grade recess in Burlington, VT. My favorite teacher introduced me to the sport (he is still proud of this fact and yes, we are still in touch), and I never looked back. I played through high school on a boys’ team, stopped once I went to university, and began again at the age of 27. I am now 54 and a true “soccer mom,” a mom who plays soccer.

Currently, I play with a couple of coed soccer groups ranging in age from 18-84 years, predominately male. For the past 14 years I have been playing in a national tournament, USASA (United States Adult Soccer Association), each summer with a women’s team from Virginia Beach. When talking on the phone with my 87-year-old mother, if I happen to mention a soccer game or tournament, there is a good chance she is going to ask, “when are you going to stop playing soccer?”  To which my regular response is “why should I stop playing?”  Then she says, “you’re going to get arthritis,” so my stepfather retorts, “ask your mom how long she played soccer!”  Meaning that my mom has arthritis and never played any sports.

What my mom doesn’t understand is that it is not just about the game. My fellow soccer players and I play for a variety of reasons beyond the exercise it provides. There is the challenge of competition, the opportunities it provides for creating social connections, and just the sheer enjoyment of playing a beautiful sport. 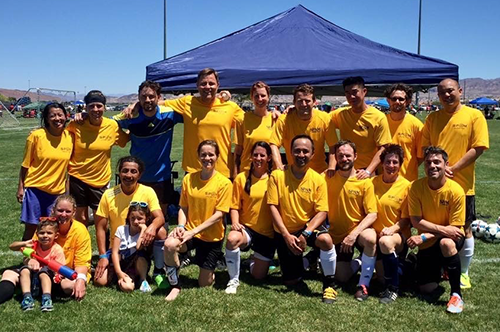 I wrote this blog a few weeks after returning from a tournament in Chattanooga, TN. Both men and women take the competition aspect very seriously and they play to win. You can see frustration on their faces when their feet do not work the way they want them to, and their exhilaration when they do. Playing well provides a sense of accomplishment. I’ve met men who were pro players back in England when they were in their 20s, and now in their 60s and 70s, they still play a very skilled game. They may not run as fast or have the same endurance, but you can see the artistry in their game, especially on set pieces such as a corner kick. Some would say they are trying to relive their youth, but that is not a valid assessment. They are living their joy. 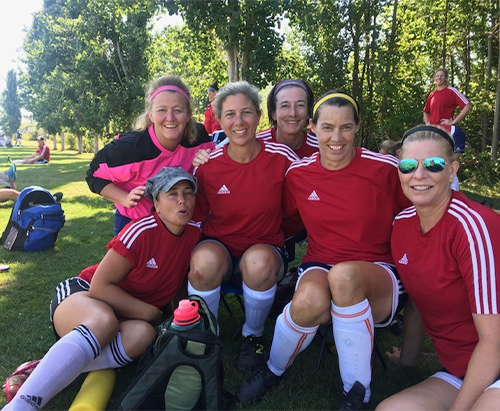 Beyond the competition there is the camaraderie amongst teammates and between teams. For most, there is a friendship and mutual respect on the pitch. Each summer I look forward to seeing my fellow soccer players. With teammates, it is as if we saw each other last week and continue where we left off the previous year. There are players from other teams who I consider friends; we’ve been attending the tournament for years. We may not always know each other’s names but when we see each other there’s a hug and a “so nice to see you.”  During the tournament, it is more common than not to run into other soccer players when out at a restaurant. Either you recognize them, or you can tell by the way they are walking (stiffly, limping, skinned knee) that they are there for the game. There is always a conversation after recognition and maybe even a joining of tables. Playing soccer brings people together. For those who may not have a strong social circle being part of a team provides companionship and a sense of belonging.

While playing soccer provides health benefits such as improving muscle strength which is important for maintaining bone mass, aerobic activity, and improving balance, it’s the psycho-social aspect of playing a team sport that keeps me coming back for more. I will continue for as long as my body allows and acknowledge that modifications will need to be made in order to continue playing. I have already made changes and I am okay with that. My sprinting speed has slowed, which kills me, because that was always my strongest skill. You just work with what you have, do the best that you can, and have fun doing it. If it stops being fun, I will need to reassess, but until that day comes you will find me out on the pitch.