My Husband Died of Dementia but I'm Not Sad. Am I Okay? 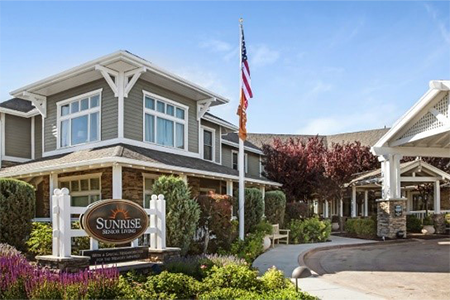 I wasn’t with him when my husband, Dennis, passed away at 12:10 a.m. on May 2, 2021. I got the news on my cell phone. I heard about my father’s passing in the same way, so I knew what I had to do. I dressed quickly and drove to the memory care facility where he had been for only eight days. It might surprise you to know that I didn’t cry. Instead of sadness, I felt a great sense of relief and even what I would call joy. When I saw his body, I knew it wasn’t him, but it hadn’t been “him” at all for the past three months, and over the past eight years, he had become less and less the person I married almost 56 years ago.

His background in teaching and writing had enabled Dennis to find work-arounds for many of the gradual changes Alzheimer’s and some vascular dementia caused in his mind and body. After his diagnosis, a social worker at the U. of U. Neurological Center told me, “He won’t know what he doesn’t know.” The things he could no longer do seemed to affect my life more than his. He remained good natured most of the time.

Dennis began 2021 still driving himself to the gym five days a week, but on Jan. 25th he began a very steep downturn. In a matter of days, he lost the ability to do most of the things he loved and what he needed to do for self-care. He had said repeatedly since his diagnosis that he wanted to “die quickly of something else,” rather than live with ravages of Alzheimer’s for years, as so many people do. He got what he wanted after only three difficult months.

Shortly after moving him to the care center, I was told that what was bringing him down so quickly was not Alzheimer’s but the lack of blood flow to his brain that had caused the vascular dementia part of his dual-diagnosis. Knowing his wishes, having them in writing, and supported by my children, I refused any type of care that would prolong his life. 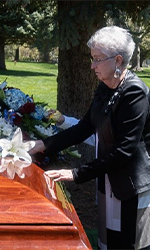 After his funeral, I was asked many times by concerned friends and family, “How are you doing?” When I replied, “I’m happy. He got what he wanted. I know he’s happy. I’m relieved. I’ve been handling everything myself for a long time; I’m going to be okay,” the responses I got gave me the impression that people thought I was probably in shock and would experience debilitating sadness and grief in the near future. I still haven’t, even though it’s been more than eight months since he passed.

I’m still asked that same question repeatedly. My answers remained the same, and so did their responses: “But you must be lonely.” “Isn’t it hard to come home to an empty house, to be alone at night?” “Don’t you miss having someone to talk to?” “It’s always hard to get through the holidays, especially the first time.” They couldn’t know that this would not be my first Christmas without a husband who could help with the planning or participate fully in our family gatherings. I began to either temper my answers or follow them with long explanations. I didn’t want people to think there was something wrong with me because I said I was okay. 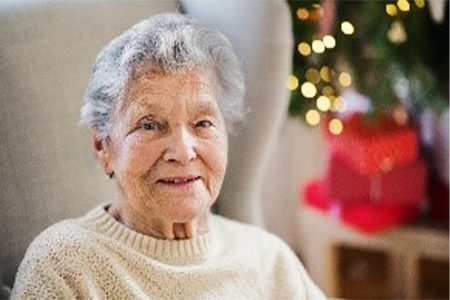 At a Christmas party, I met the mother-in-law of a new neighbor and immediately noticed the care she was giving her husband so he could be there with her. I sat beside a daughter and asked, “Tell me about your father.” She didn’t hesitate to tell me that he suffered from both Parkinson’s and Lewy Body dementia. I told her about my experience with caregiving and said I would be happy to talk to her or her mom anytime.

A few days later, my new friend asked me if I would have lunch with her and her mother-in-law, Joan (not her real name), because she “really needs someone to talk to who understands what she is going through.” I’d only met Joan once, so I was somewhat surprised by the invitation, and even more surprised when I learned that she lives in Brigham City. My friend asked if I we could meet her in Layton, a city about halfway between there and where we live. This dear woman was willing to drive more than 45 minutes in order to talk to someone with whom she felt she would be safe sharing her feelings.

We talked for almost two hours. We were so frank with each other that at one point she asked her daughter-in-law if she was okay learning all these details. Reassured, we both went on, sharing our experiences and our feelings of grief and loss that we’d had for years.

I told Joan that when my husband died I felt like the weight of the world had been lifted off my shoulders, that I was still happy and looking forward to all the things I could do now that I wasn’t constantly worrying about and caring for him. She shed tears of relief and said she was sure she would feel the same way when her husband was finally free of his worn out body and mind.

I know that, depending on the circumstances, the loss of a loved one can be devastating, and that’s okay, too. But that day at lunch I felt reassured that it was okay for me to be happy, and that I’d made a new friend who now felt it would be okay for her to feel happy and free after the final loss of her husband.

Marti Lythgoe is a freelance writer who for nine years has researched and written a monthly blog for a home healthcare agency. She loves to help others and herself by sharing what she has learned.